Check in begins at 10am with bowling set to start at 11am. The field is limited to 63 teams so get your entry and entry fee in ASAP. All teams will bowl 8 games of Baker qualifying with 1 in 6 teams cashing and advancing to the round robin match play. Pins from qualifying carry over to match play. All match play will be one game matches. The winning team will receive 30 bonus pins while teams will each get 15 bonus pins for a tie game. Total wood at the end of match play will determine final position standings. Entry fee is $200 per team. First place is guaranteed at least $2200 and low to cash will be at least $400.

There will be brackets and side pots available. Lane pattern for this year will be the Kegel Krypton. 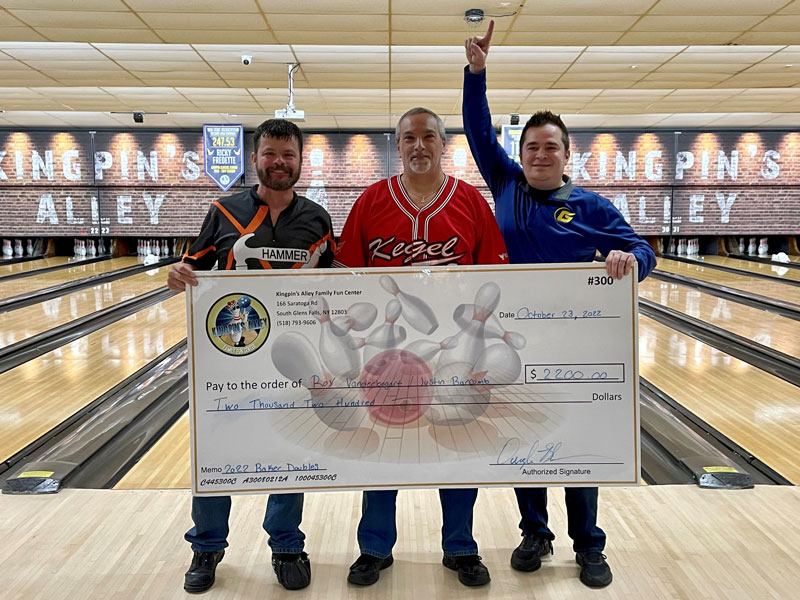 The 2022 Baker Doubles Tournament took place on Sunday, October 23.  We floored 36 teams for this year’s event, which was up from last year but still short of a full field of 63.  That being said, we still paid as advertised with first place receiving $2200 and low to cash getting $550 (which was above the $400 advertised).

Teams bowled 8 baker games during qualifying with the top 6 teams advancing to the round robin match play.

When the qualifying was done the 6 teams that advanced were:

This year the tournament was contested on KEGEL KRYPTON.  This was a 43’ pattern just under a 3:1 ratio.  The pattern was difficult as only 7 of the 36 teams finished qualifying on the plus side.  After the 8 games of qualifying, Nick Miseno and Don Herrington held a 25 pin lead over Roy Vanderbogart and Justin Barcomb.  The top six teams moved onto round robin match play where each match play win was worth 30 bonus pins.  Teams each got 15 bonus pins for a tie.  Final standings were determined by total pins after match play.

Here then are the final standings after match play: