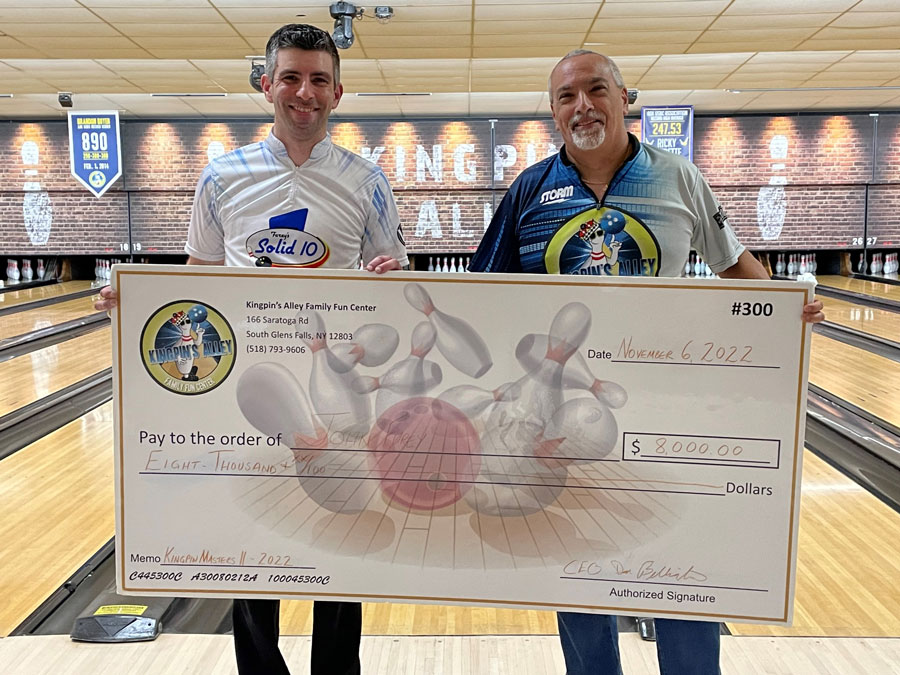 John Fuery (L) is presented his first place check from Kingpin’s Alley proprietor, Doug Bohannon.  Fuery was the number 9 seed in the bracket and he won four matches to claim the $8000 top prize

The Kingpin Masters is a two day event culminating with the Main Event on Sunday November 6, 2022.

Saturday November 5 will feature a doubles event at 4pm.  The field is limited to 60 teams.  Entry fee is $120 per team.  Qualifying will consist of 3 games with teams moving each game.  Payout ratio will be 1 in 6.  This is a post your score event and will have no match play.  Top spot is guaranteed $1200.  There will be brackets and this event will be bowled on a KEGEL MERCURY.
This event is open to all bowlers.

The 2022 Kingpin Masters Tournament took place over the weekend of November 5 & 6 at Kingpin’s Alley in South Glens Falls.

Saturday was the doubles portion of the event.  20 teams took to the lanes to compete for the $1200 top prize.  Teams bowled three games of regular doubles in a post your score contest.

The team of Eric Copping and Jon Wilbur used a 502 last game to vault to the win with their combined score of 1390.  Darren Andretta and Adam Chase, last year’s co-champions, took second place.  They were followed by David Simard and Nathan Ruest-Lajoie and Amanda Chrzanowski & Kerry Martin in 3rd and 4th places respectively.

Sunday was the Main Event with a top prize of $8000 up for grabs.  61 bowlers hit the lanes for 5 games of qualifying to see which 10 would advance to the two-game elimination match play bracket.

Billy McGaffin led the qualifying from wire to wire with a 5-game pinfall of 1,196 pins (239.20average).  The top 10 scores advanced to the 2 game, total wood wins, match play bracket.